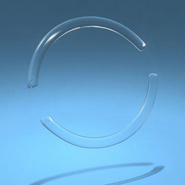 Keratoconus is a disease of the cornea, the clear front outer surface of the eye, which affects from 1 in 500 to 1 in 2,000 people in the general population. It is due to a breakdown of the inner layers of the cornea, called stroma or lamellae, which weakens the corneal structure. Due to one’s normal eye pressure, the cornea begins to push outward creating a cone or bulge of the cornea. The cone or bulge causes the light entering the eye to become scattered, distorting the way one sees images. In advanced stages, seeing becomes extremely difficult.

Keratoconus often starts during one’s teenage years, although there have been cases reported both earlier and later in life. Biological changes such as puberty or pregnancy can trigger the disease. It’s most often a bilateral disease, meaning it affects both eyes and there can be a delay of up to five years before the second eye begins to show symptoms.

The most common symptom is fluctuating vision. Oftentimes a new set of contact lenses or glasses may provide crisp, clear vision but only for a short period of time. Within a year or two ones vision is no longer acceptable and a visit to the eye doctor is required again. Your ophthalmologist will review a topographical map of the cornea, along with other refractive measurements, which will confirm if one has keratoconus.

At this point, there are two options for the patient. The first is INTACS corneal implants, a minimally invasive procedure in which a surgeon will implant two micro-thin implants made of medical-plastic in the outer areas of the cornea, flattening the cone and making for a normal corneal surface. The procedure is pain free, maintenance free and can be completed within 20 to 30 minutes per eye. New contact lenses or glasses are often worn after INTACS because the cornea has been modified to a more normalized shape. The second option is a corneal transplant, which has been successfully performed for decades. Be certain to ask your doctor if INTACS or a corneal transplant may be right for you if you have been diagnosed with keratoconus.

Request an appointment online by using our schedule form.